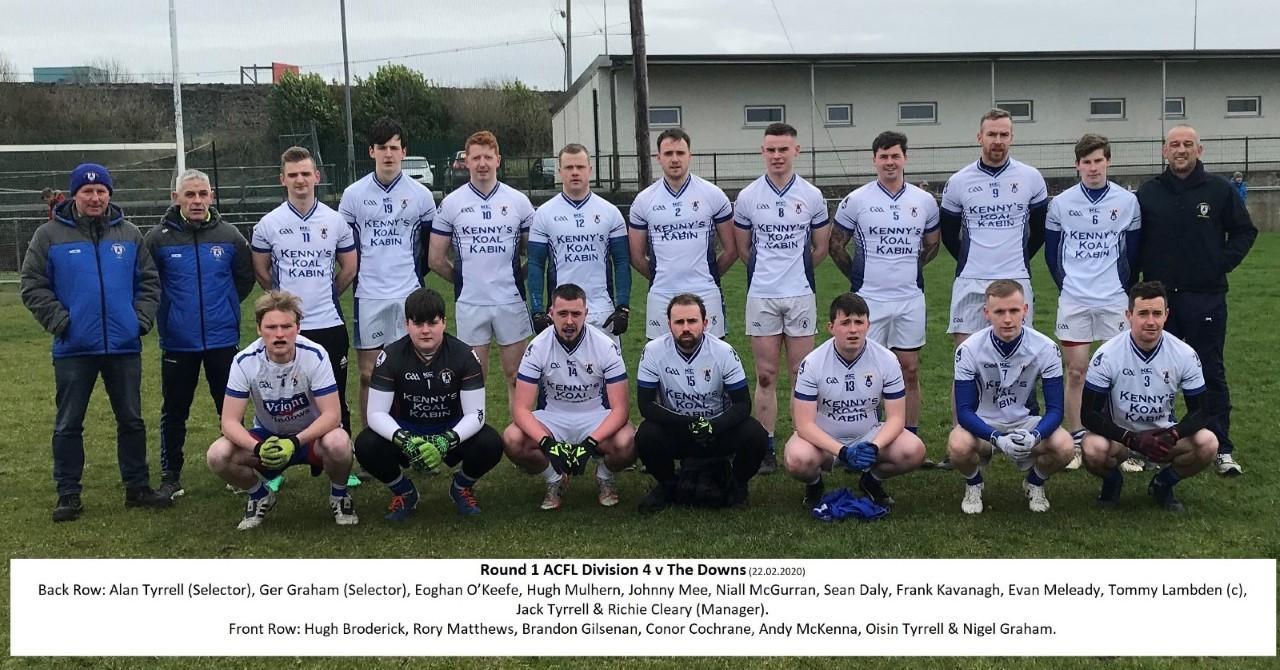 St Loman’s began their division three campaign with the visit of Ballynacargy to Lakepont Park. Both teams traded three points each in the early stages with Kevin Regan, Conan O’Hara and Niall McGurran all on target for the hosts, with McGurran’s the pick of the bunch. Troy Maher then struck a blow for the visitors when he found the net after finding acres of space in the Loman’s defence. Ballynacargy followed this up with another point moments later. However a second point from Regan and a Gareth Hickey point on the stroke of half-time left the deficit at two.

Ballynacargy got the first score of the second half but after that the Blues hit a purple patch. Conan O’Hara brought the gap back to two with a lovely score before Kevin Regan found Gareth Hickey who raised the Green Flag for the Saints to put them in front. The Hosts continued to widen the score-line with Conan O’Hara, Chris Gilbert and a double from Tristan Graham either side of a Ballyncargy point left the Blues in control. Moments Later Gareth Hickey found himself one-on-one with the Ballynacargy keeper and the outcome was never in doubt. Hickey struck his second goal of the afternoon which put the game beyond doubt. Both teams traded scores in the closing stages with Gilbert and O’Hara on target again for Loman’s.

There were some impressive individual performances for the Blues with Shane Flynn doing well on his return and Peter Foy impressing on his Loman’s debut. Gareth Hickey was impressive up front as always but man of the match was Conan O’Hara who gave an exhibition in point-scoring especially in the second half. A good afternoon for the Hosts who started 2020 on the right foot.

Last year’s Division 5 champions welcomed The Downs (beaten finalists 2019) to Lakepoint Park for the first round of Division 4. Although the first half was evenly contested, Lomans failure to convert scores (especially 3 goal opportunities) cost them dearly, the score at half time read The Downs 0-7 to St. Lomans 0-1, with Frank Kavanagh being the sole scorer for the Blues. Lomans got off to a great start in the 2nd half when a long-range effort from Johnny Mee deceived the Downs goalkeeper and ended up in the back of the net, Mee subsequently followed up with a nice point from play a few minutes later. However, from there on in Lomans were on the backfoot as the Downs consistently picked off some good scores, Niall McGurran raised one green flag for Lomans, but when Mick Gordon blew the final whistle the Downs had ran out deserving winners.

Despite the score line Lomans will take several positives from this match. A raft of player withdrawals earlier Saturday morning meant Lomans panel was greatly diminished and the Blues had to rely on some younger members to step up to the plate, players like Rory Matthews, Brandon Gilsenan and Hugh Mulhern, who all acquitted themselves very well, however special mention has to go to selector Ger Graham who rolled back the years when he entered the fray for the second half. Next Friday night will see St. Lomans host Garrycaslte at Lakepoint Park for Round 2 of the league. Team; Rory Matthews, Sean Daly, Nigel Graham, Hugh Broderick, Evan Meleady, Jack Tyrrell, Oisin Tyrrell, Tommy Lambden (c), Frank Kavanagh (0-1), Niall McGurran (1-0), Eoghan O’Keefe, Johnny Mee (1-1), Andy McKenna, Brandon Gilsenan, Conor Cochrane. Subs; Hugh Mulhern & Ger Graham.

Sing with the Saints tickets:

Tickets are now available on line at www.mullingarartscentre.ie
Or call 044 93 47777.

All seats have reserved numbers so if you would like a balcony seat, or front row seats, or would like to book 4 or 5 seats together, book now to avoid disappointment as tickets are starting to sell.

St Loman’s wish to offer their condolences to the Brady Family following the passing of John J. Brady- Auburn Village, Mullingar, Co Westmeath and late of Carnin, Ballyjamesduff, Co. Cavan. John was a club stalwart and his contribution to the club will never be forgotten.